What the Auto Industry, Rare Earth Elements have in Common

In a June 27 piece from Business Insider, Jim Powell, a technology and strategic metals analyst with Laurentian Bank Securities, attempts to clear up the confusion over the future supply and demand of critical metals. His interview with The Critical Metals Report highlights the struggle between China and the rest of the world over Rare Earth Elements (REEs). Powell explains briefly that the major demand for these elements is for use in “technology-type applications” such as “batteries for cars” like “GM’s Volt.”

The U.S. Administration has been advocating for greener technologies in the automotive industry over the past few years, encouraging American consumers to do their part by purchasing plug-in hybrids and all-electric vehicles.  During his State of the Union speech in January, President Obama announced that he wants 1 million of these alternative cars on our roads by 2015.

What does the U.S. auto industry have to do with Rare Earth Elements? The current grip-hold China has on the REE market could easily impact the cost of the products the President is urging American manufacturers to make more of and asking consumers to purchase. Rare Earth elements essentially make all of these emerging technologies work. 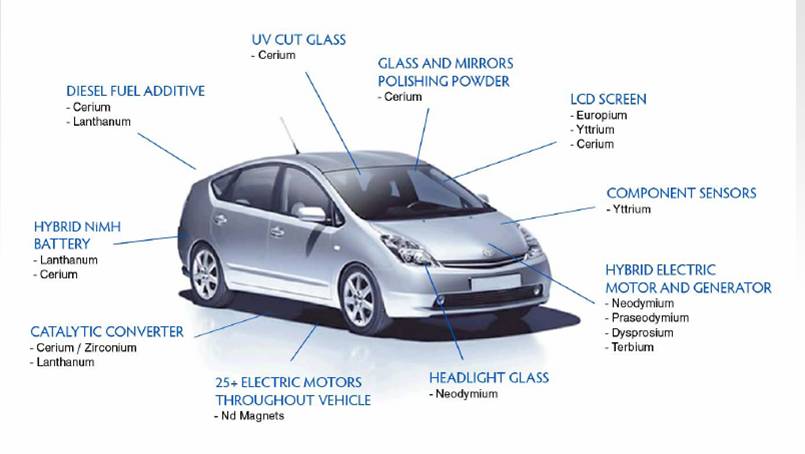 Rare Earths are used in a number of automotive applications such as catalytic converters and other auto parts. The batteries that power plug-in hybrid and electric vehicles (such as the Chevrolet Volt and Nissan Leaf) require some REEs in combination with Neodymium permanent magnets, which is a light Rare Earth element. However, manganese (not a REE but 100 percent imported by the U.S. due to lack of our own deposits) is most commonly found in newer lithium-ion batteries.

Right now, China provides 97 percent of global Rare Earths production.  The U.S. provides a fraction of one percent.  But shift to known reserves – the potential to provide future supply – and the numbers tell a different story:  China has 36 percent of known reserves, with the U.S. accounting for 13 to 15 percent.

With China keeping more and more of its Rare Earth elements off of the world market, how does the Administration expect the automotive industry to reach its goal in four years without exploring the resources available to us in America?