Canada is the leading country for mineral exploration for the 10th year in  a row, according to the latest rankings from  Metals Economics Group’s (MEG) Corporate  Exploration Strategies. The country  represents 18 percent of worldwide investments into non-fuel mineral  exploration.

Here are some interesting figures on Canada from the MEG Corporate  Exploration Strategies study, which Commodities Now says  includes “precious and base metals, diamonds, uranium and some  industrial minerals.”:

- Canadian-based companies accounted for more than half of the  2,400+ active explorers in the 2011 report.

- Those companies, collectively, accounted for 40 percent of the $17.25 billion budgeted by all companies for nonferrous exploration last  year.

- If the $3.1 billion in planned Canadian nonferrous exploration  spending, Ontario, Quebec and British Columbia accounted for more than 60  percent, with a total of 781 companies planning to explore in Canada in  2011. 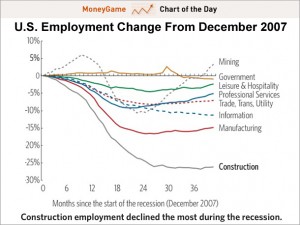 In 2002, Canada overtook Australia as the world’s top country for  exploration and has remained there for the last ten years. We can’t help  but note that the Canadian economy benefits greatly from the country’s pro-mining stance.  According to the Fraser Institute,  Canada’s leading free market think-tank, mining and metal processing has  been (and is expected to remain) an important contributor to the country’s  economic growth.

When taking into account that the mining industry was the only industry in the United States to add jobs since 2007, it seems clearly evident that many more jobs could be added if U.S. policy makers would take a note from our northern neighbors and focus on fostering  a climate that cultivates responsible investment in the growth sector of metals and minerals.