Will President Obama’s focus on manufacturing raise awareness of our critical mineral needs?

By Sandra Wirtz | Posted: January 26, 2012 at 11:20 am
While we can fully expect 2012 to be the year of partisan politics with the Presidential race kicking into high gear, we can probably all agree that we’d like to see the resurgence of the United States’ manufacturing base.President Barack Obama touched on the issue in his State of the Union address delivered on Tuesday, when he outlined his vision of “an America that attracts a new generation of high-tech manufacturing and high-paying jobs. A future where we’re in control of our own energy, and our security and prosperity aren’t so tied to unstable parts of the world.”

In doing so, he rightfully stressed the importance of manufacturing as a key foundation for future prosperity, and acknowledged the challenges associated with relying on foreign energy sources.

Given American Resources’ focus, we’d be remiss if we didn’t inject an additional important component into the debate; a component to which Cong. Paul Gosar (AZ-1, R) alluded while live-tweeting during the President’s debate –  the need for a national natural resource strategy:

The foundation of American manufacturing is the raw materials that feed the effort – not just fuel, but also non-fuel mineral resources that are critical to so many of the manufacturing applications we want to see developed here in the United States. 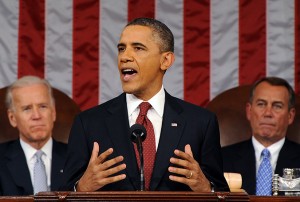 As green technologies are heavily reliant on rare earth elements and other critical non-fuel mineral resources, transitioning from an oil economy must mean more than merely trading one set of foreign dependencies for another.

Page six of the newly published USGS Mineral Commodities Summary illustrates how far we are from this goal. The chart depicting U.S. dependence on foreign sources for key non-fuel mineral resources shows us 100% dependent on foreign supplies for nineteen metals and minerals, with China being one of our top three suppliers for eleven of the nineteen. For a whopping forty-three metals and minerals, our import dependency rate stands at 50% or more.

The fact is, we are not fortunate in all cases to have potential resources under our soil, but for dozens of these metals we do have the opportunity to reduce our foreign dependence – and create well-paying jobs in the process.

The key to our economic and strategic future is connecting the dots between manufacturing, energy and resources, and formulating a coherent critical mineral strategy that keeps us competitive as the global race for resources heats up.  Will U.S. policy recognize that American manufacturing begins with American metals and minerals?